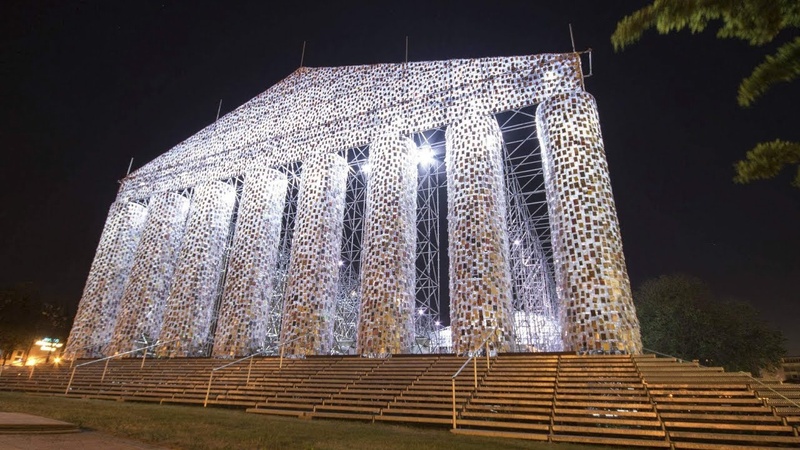 “Censorship is the child of fear and the father of ignorance.”

Banning books has long been a way for organizations to exert power over people; thinking that ideologies and passions can be swayed by hindering access to materials, history has repeated itself time and time again. The thought is that without the tangible pages to flip through, the words will fade and the desire will heal. Striking a match, they light a fire to quash what they disagree with, but they do it in vain- for ideas are incombustible.

Book bans are still very much a part of society today. School districts, governments and other organizations boycott literature for a number of reasons. Often the reasoning is that the content is too explicit, or not suitable for a certain age group. The censorship is always under the clout of “protection.” So, it’s up to us to take a stance against censorship, and work towards making literature available to all who seek it. Communities of people are putting together projects around the world, to remind people of the effects of censorship.

Artist Marta Minuji has created a life size replica of the Parthenon, built entirely out of banned books from around the world. The Parthenon of Books consists of over 100,000 books that were donated by thousands around the world. The texts range from Einstein’s “The Foundation of General Theory and Relativity” to Stephanie Meyer’s “Twilight” series. To further emphasize our literary freedoms, the structure has been erected in a public square, in Kassel, Germany, where Nazi’s publicly burned over 2,000 banned books on May 19, 1933 as part of the “Campaign against the un-German spirit.” The books are adhered to the giant steel structure delicately, and wrapped in plastic wrap to keep them safe from the elements. The exhibit runs until December 14th, 2017. At its conclusion, patrons will help disassemble the project, and take home the books they wish to keep.

Highlighting some of America’s literary slights, The Library of Congress has created an exhibit focusing on banned books that helped shape our nation. “Books That Shaped America” is curated to spotlight many amazing works, such as “The Adventures of Huckleberry Finn” by Mark Twain, “Beloved” by Toni Morrison, and “The Great Gatsby” by F. Scott Fitzgerald, which have all been banned throughout the history of the United States. Book bans are still going on today in America.  Throughout school districts and libraries, groups are banding together to have content removed from public arenas. School Boards go up against parents on a regular basis, one of which is the Sauk Prairie School District, with debate over “The Absolutely True Diary of a Part-Time Indian” by Sherman Alexie. In this instance, the school board voted to keep the book as part of its curriculum, against the wishes of some parents.

Projects that shine a light on our world’s tendency for censorship are powerful tools that spark debate and conversation over the practice of banning books. Quantifying books that we boycott, and seeing their impacts over time is enlightening. Whether or not you agree with censorship of literature, being aware of it’s existence is paramount. We need to consider how caging our words can impact the world around us, and we must always remember- the caged bird still sings.

Terrible at taking photos these days, but great at being present 🤷‍♀️🤷‍♀️🤷‍♀️🤷‍♀️ thanks for friends who showered us with love today! We’re grateful to have a lot of people who love us and are excited for BB girl Messick 💕💕💕
Happy New Years from two kids who went home early to comfort a dog who is scared of fireworks💥 BUT THEY STILL GOT IT! See you soon #2020 💕🙏🙋‍♀️ . . . #newyearseve #happynewyear #atx
Spending #Christmas in Santa, Fe was lovely. My fave highlights were: taking our dogs, long strands of chili peppers used as decorations, beautiful doors on every gate and adobe house, Christmas lights everywhere, the Georgia o’keeffe collection, amazing art at every turn, great food (green AND red chile ?!), #MEOWWOLF (x 1000), the farolito walk on Xmas eve, snow ❄️, and spending quality time with bae doing way too much, not relaxing, and celebrating our pending parenthood 👶 . . And for #NYE , my next trick will be going to bed by 10 🤣🤣🤣 . Cheers to 2019 (the good and the bad) and cheers to doing new things and embarking on adventures 💕 🥂
My top 9 of 2019 is full of my biggest yearly accomplishments: growing a BB, remodeling my house, traveling to new places and being a general babe 💁‍♀️💕👌 It’s been a year with a lot of good and a lot of challenges....and I expect next year to be the hyped version of that! Cheers to the good and bad and everything in between: life is hard and sweet and beautiful 🥰 . . . #atx #top9 #preggo #remodel #smallspacedesign #rennovation #diy
🎄 Merry Christmas 🎄 from these *VERY SOON TO BE* cool parents 😎 on our way back from an adorable baby 👶 moon 🌙 in #SantaFe 🌵. Hope everyone is living their best life today and being attentive to your mental health over obligation! K LOVE YOU BYE, SEE YOU IN 10 HOURS #ATX 💕
Double chins, belly laughs, messy hair buns and 🎄 holiday clothes 🎄 are my seasonal staples 💁‍♀️🤪. WHO IS EXCITED FOR CHRISTMAS? We are 🙋‍♀️🙋‍♀️🙋‍♀️🙋‍♀️🙋‍♀️ #christmas #atx #preggo #cheer