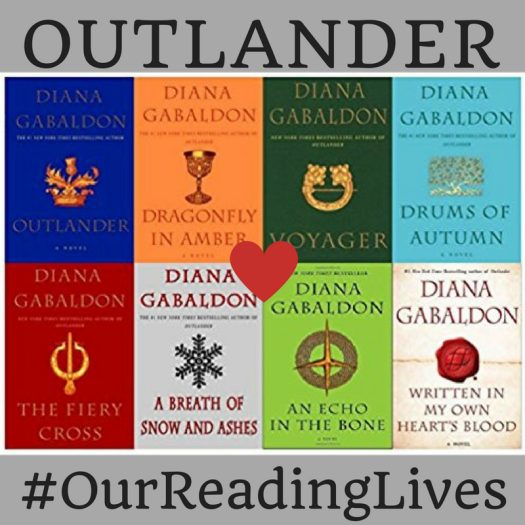 Diana Gabaldon’s Outlander is responsible for my latest frenzy of binge reading. With every installment clocking-in at close to 1,000 pages, it’s no easy feat. There are currently eight books available, more on the horizon, and I’m currently stuck meandering through the third installment as I type (Such talent. Much Read.) I’m having to shuffle around my other ongoing reads (podcast content, books for work, and other stories I’m caught up in), causing a great disturbance in my #TBR pile. Furthermore, I have become plagued with a deep, insidious infection: frantically scanning Wikipedia for hours on end, mid read, educating myself on the background and details.

I mean, this has seriously impacted my progress. I am half-way through book three — Voyager — and I’m DESPERATE to catch up on the Starz TV adaptation (currently on Season three/Book three content). I have a general distaste for spoilers, especially when it comes to books, so I have been abstaining from watching.  It’s dreadfully painful (the wait, not the show — the show is lovely). So, you can see how this Wikipedia craze is hindering essentially every aspect of my life. But, it’s a real Catch-22; I need to read more Outlander, but in order to fully experience Outlander I need to have a better understanding of 18th Century Scotland, The Stuart Reign (and decline), The Battle of Culloden, The Jacobites, 20th Century Post-World War II feelings/life, AND SO MUCH MORE. To fully appreciate the nuances of the series, I feel I must be educated on the details.

Listen, I know what you’re thinking: First world problems. AND, I hear you. But, for just a minute, can I tell you how incredibly sad the life of Mary Queen of Scots was? I mean, she essentially spent her childhood trying to not be murdered, being wed off to France, being forced out when her husband died, trying to stay relevant in Scotland (while also casually laying claims to the English Throne vs. Elizabeth I), securing an heir with a horrible husband, living through gossip and murder and intrigue, securing the English throne for her son by forfeiting her own, and eventually losing her head while her lineage and legacy fell out from underneath her in a matter of generations.

So, yeah, she certainly had more problems than I am experiencing now. However, this is my reading life. This is where I’m at. I’m desperate to find out when Jamie and Claire reunite, and what century it’s in, and when will their daughter Brianna proclaim her love and make a move, and what will the Fraser age gap be, AND WHAT HAPPENED TO MURTAGH? The need to know is driving me to put off my other “To-Do’s”.

That being said, I better get back to it. Wikipedia is not going to read itself, and it’s a beautiful day to get behind on my self-imposed goals and deadlines.

Cheers to good books that make you think, and to #OurReadingLives.

Make sure you live them fully!