The book is always better than the movies. Like, that’s a given. Non-negotiable. Not up for debate. Hello, goodbye.

Now that we have that out of the way, let’s acknowledge how excited we get about adaptations. We love seeing our favorite stories come to life on the big screen, and when it’s done right, it steals a special place in your heart (I’m looking at you The Princess Bride). So, naturally, there’s some anxiety and anticipation that comes with these adaptations….and a little bit of TBR building. Because, obviously, you have to read the book first!

This might be a little late for you movie-goers, BUT, here are my “Top 5 Books to Read Before You See The Movie This Year:”

We’ve already been hyping this breakout Sci-Fi story merging pop-culture with dystopia, and we think you need to read it immediately!  Steven Spielberg has directed the adaptation, which comes out March 30th, so be sure to jump into the VR world full of adventure, love, and life or death situations.

4.“The Girl in the Spider’s Web” by David Lagercrantz:

The Millennium series continues with a new writer, and we get more of what we love most: Lisbeth Salander. There are more twists than ever in this new book, as we see Salander’s relationship with a hacker group known as the “Spider Society”. Take a dive into the seedy underworld, and get pumped for the 2018 movie adaptation starring Claire Foy, coming out in September.

3.Simon Vs. The Homo Sapiens Agenda:

This beautiful coming of age story chronicles Simon, who is not so out of the closet. When his secret falls into the wrong hands, he must pull himself out of his comfort zone, before he’s pushed out. Simon is charming and relatable. “Love, Simon” comes to the screen March 18th- so catch this book soon!

Rachel Chu is a normal Middle Class gal, dating the man of her dreams. When he invites her to Singapore to meet his  family for a wedding, she doesn’t know what she’s getting into. Thrown into the world of glitz and glam, she learns that he is one of Asia’s most eligible bachelors, a part of a family dynasty, and the heir to his families fortunes. Her new world unfolds as she navigates these uncharted waters. The super hyped movie adaptation will be out on August 17th, so catch on the series now!

This touching tale chronicles the life of interested and absurd Bernadette and what happens when she goes missing. Her daughter Bee misses her dearly, and the tale unfolds one piece at a time giving us a look at women in the workplace, creativity, eccentricities and the mother daughter relationship. The movie adaptation has an all star cast, including Cate Blanchett, and comes out May 11th- so check out this whimsical mystery before then!

AND, because there’s too many to choose from, here’s the honorable mentions for 2018:

Boy Erased by Garrard Conley (A memoir chronicling life for a young gay man in rural Arkansas. Lovely and poetic, set to air with an all star cast including Nicole Kidman.)

Ophelia by Lisa Klein (Based on the Shakespearean character, we look at Hamlet through Ophelia’s eyes. An all star cast is headed by Daisy Ridley!)

The Hate U Give by Angie Thomas (This break out novel chronicles life for some in the Black Lives Matter movement, and brings real life issues to the screen.) 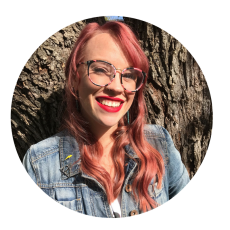 Morgan Messick is a Pop-Culture fanatic, Podcast Host, Booktuber & total #BookBabe living in Austin, TX with her Husband and two dogs —Scoop & Eleanor. She aspires to grow her #TBR pile, do all of the hiking, travel as often as possible and make a joke at every turn. She utilizes laughter and yoga for daily medicine, thinks that Harry Potter is magic for all ages, and truly believes Die Hard is a great Christmas movie (SO DEAL WITH IT.)